Gregory M. Scharf, sone of a wealthy New Yorker, met his guru, Srila Prabhupada, through his brother Brahmananda Das, when ISKCON was a fledgling spiritual movement. He soon became Gargamuni Das. This is the story of his service to Srila Prabhupada, full of adventure, determination, creativity and grit.

Gargamuni used his talents to raise funds for ISKCON’s missionary activities for which Srila Prabhupada affectionately and humorously nicknamed him “Gargamoney.”

“Gargamoney: Serving Srila Prabhupada 1966-1977, will provide intimate glimpses into Srila Prabhupada and his mission, and I encourage devotees to dive into the nectar.” —H.H. Giriraj Swami

“Gargamuni Prabhu can certainly be called one of the great pioneers of ISKCON who paved the way for so many devotees, including myself.”
—Srutakirti Das 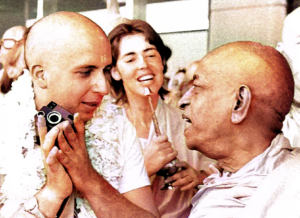