View cart “The Glorious Life of Srila Narottama Dasa Thakura” has been added to your cart.

The Emergence of Women’s Voices in ISKCON

A Collection of Letters, Articles, Papers, and Conference Reports from 1988 to 2020

The Emergence of Women’s Voices in ISKCON is a written documentary of the voices of the first-generation pioneer women of ISKCON. In this anthology they pass the torch of wisdom and lessons learned to future generations. Thirty-three authors speak about their relationships with Srila Prabhupada, what women bring to Krishna consciousness, and the importance of women’s voices in ISKCON. They tackle difficult issues with philosophy, reason, common sense, decades of personal experience, and Krishna consciousness.

The essays in this anthology will bring light to ISKCON members around the world. They are as applicable today as they were yesterday and can be used as a road map to move into the future. Many senior devotees have poured out their wise hearts here, having thought deeply about this topic. They knew Srila Prabhupada and lived under his roof.

This compilation of writings was collected faithfully over the years by Pranada devi dasi. To find all these materials separately would be a daunting, if not impossible, task, as many of these pieces can no longer be found. However, all are collected here for use as a definitive reference.

“This is not only an important book of history, but a useful resource – a veritable encyclopedia of responses to misconceptions about women and their role in Krishna consciousness. Refer regularly to this comprehensive reference and you will stand on solid ground in good company.” – from the Introduction by Pranada devi dasi

“For women ISKCON members of the present and into the future, I remind you of the true story of a young Vaishnavi who was sitting with Srila Prabhupada when he said to room full of his students, ‘I want all of my disciples to open temples.’ This 16-year old girl, a recent initiate, inquired, ‘Even the girls Swamiji’ Prabhupada responded, ‘Yes, why not? Even the girls.’ ” – from the Foreword by Anuttama dasa 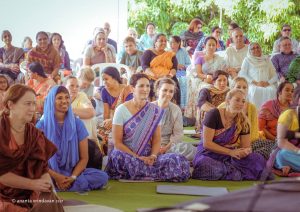 The Emergence of Women

1990
On Chivalry in ISKCON and the Rights of Our Mother by Jagannatha Krishna dasa 70
Damsels in Distress ask, “Where are our Knights in Shining Armor?” by Sita devi dasi 81

1991
Back to Godhead Articles 110
Doing Things the “Prabhupada Way” by Pranada devi dasi 110
A House for the Entire World by Sita devi dasi 113
Srila Prabhupada and His Women Disciples by Visakha devi dasi 115
Where Are Your Women Teachers? by Manasa Ganga devi dasi 117
Krishna Knows What We Need by Jadurani devi dasi 121

1995
Presentation for The Association for the Sociology of Religion by Pranada dasi 145
Guidelines for ISKCON Women in Devotee Relationships by Caroline Constantine, MA Women’s Ministry Special Advisor 149

1999
Third Annual Women’s Ministry Conference, New Vrindaban 294
Toward Krishna Together by Visakha dasi 294
Continuing the Journey by Pranada dasi 307
What’s a Woman to Do? by Visakha dasi 311

“Healing the Heart of ISKCON”: A Delegation of Vaishnavis to the Annual Mayapur GBC Meetings 321
Introduction to the 2000 GBC Meetings by Visakha and Sudharma dasis 321
Srila Prabhupada’s Transcendental Sweetness and Beauty by Yamuna Devi 327
Prabhupada’s Ladies and Soul Concern by Visakha dasi 330
ISKCON’s Social History from a Woman’s Perspective by Sitala dasi 336
Symptoms of Disease by Sudharma dasi 338
Diverse Voices of an Enriched Culture by Rukmini dasi 343
Srila Prabhupada’s Mood Was Not Compromise by Saudamani dasi 349
Austerity of Speech by Kusha dasi 351
A Response to Women in ISKCON by Urmila dasi 354
Are We Feminists or Prabhupadanugas? by Pranada dasi 356
2000 GBC Resolutions 361
The Reassertion of Women within ISKCON by Kim Knott 363
Vaishnavi Ministry Mission Statement 365

2001
Serving Krishna as Husband and Wife by Visakha dasi 367

Do women have equal rights in ISKCON? Interview with Ananga Manjari dasi in Vrindavan 399

2020: Parting Words
A Letter To Our Future Selves by Rukmini dasi 474
The Failed Experiment versus Loving Krishna by Kusha dasi 478
A Call to be Torchbearers by Govinda Priya dasi 481
A Vision for ISKCON’s Future by Shyamala Kishori dasi 483
Courageous Women Ushering in a New Partnership Paradigm for Relationships by Vrajalila dasi 485
Epilogue: Reflections and Lessons Learned from the Founder of the Vaishnavi Ministry by Sudharma dasi 492

1991-2000: Priti-laksanam Newsletters 505
1998: Women’s Ministry Conference Brochure 505
1998: Conspiracy to Terminate the ISKCON Women’s Ministry 505
2004: Healing the Heart of ISKCON by Kim Knott 506
2004: Female Diksa-gurus in ISKCON by the Sastric Advisory Council 506
2013: Did Srila Prabhupada Want Women Diksa Gurus? by Kaunteya dasa 506
2013: Some Evidence Regarding Education and Guruship for Vaishnavis by
Bhaktarupa dasa and Madhavananda dasa 507
2018: What’s Woman to Do? by Visakha dasi 507
2020: Guru: The Principle, Not the Body by Madana Mohana dasa 508
North American GBC/Temple Presidents Resolutions 509
GBC Resolutions Pertaining to Women from 1996 to 2014 509
Biographies of the Authors 523